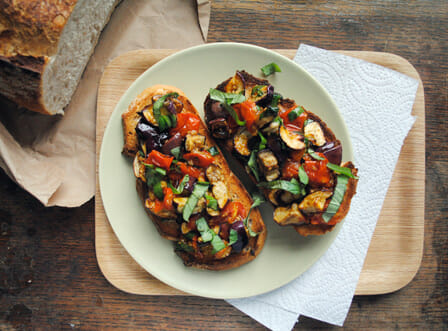 Since coming back from my holiday earlier this month, I’ve been somewhat lacking in culinary inspiration. Other than trying to re-create some memorable meals we enjoyed in Italy, I’ve had few brainwaves for new and exciting dishes to make. When this happens, I have a couple coping mechanisms that I can employ:

1. Go to the kitchen, open the fridge and stare at food until inspiration strikes. Often successful, but hardly energy-efficient.

2. Grab a cookbook (or several), ideally one that hasn’t been opened in a while. Flip until something grabs me.

3. Ask myself “What do I want to eat right now?”, and hope that the answer is something more exciting than peanut butter out of the jar or scrambled eggs. 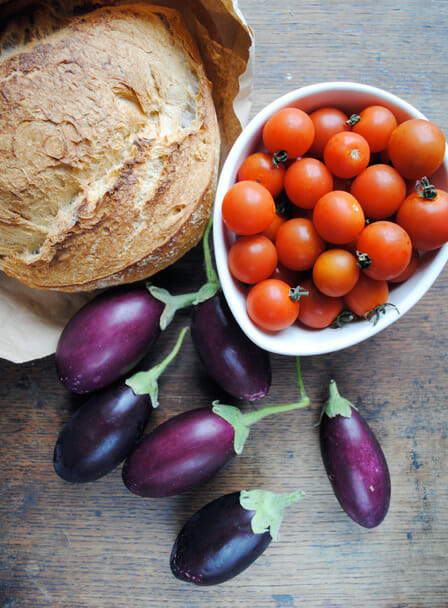 In this case, it was strategy #3 which won out. Staring into the fridge only served as an opportunity to admire my recent defrosting job, and even walking to the local Waterstones to browse new cookbooks didn’t light my cooking fire. On asking myself what I felt like for lunch, however, there was a clear answer: roast eggplant and cherry tomatoes, please.

My favourite flavour of late comes courtesy of the Pioneer Woman’s favourite pizza. Ever since I first tried the recipe, I’ve been enjoying this veg combo on pizzas, tossed with pasta, in omelettes- you name it. You might not realise how surprising this, but to my family and those who’ve known me for a while, it’s big news. See, until recently I hated eggplant. Detested it. No matter how it was prepared or what it was paired with, I found it (like other members of the summer squash family) to be mushy and flavourless- the kind of food you’d give a sick baby. So the fact that I’m now shovelling crispy roasted eggplant into my mouth at the rate of light is rather an event, I’m sure you’ll agree. 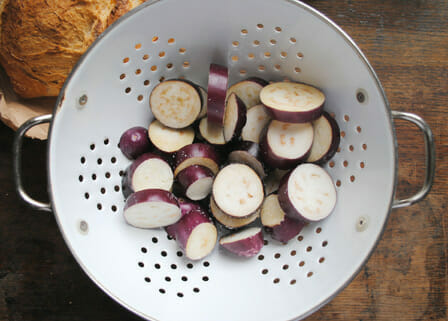 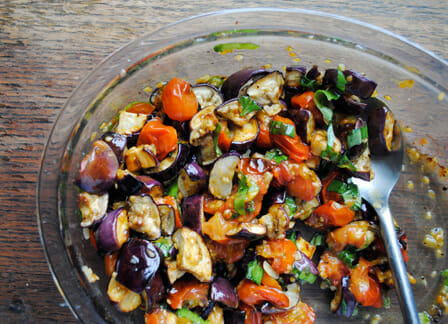 But this is a new love, and I’m careful not to move too fast. Given that I only recently started to like tomatoes (I know, I’m weird), I’m not about to run off to make Eggplant Parmesan or Baba Ghanoush before I’m ready. Who knows how I’d feel about eggplant without its crisp edges and juicy partner-in-crime? So for now, the delicate balance of these two vegetables will be upheld.

Luckily, that isn’t too difficult. This recipe could be used in any number of ways, including (but not limited to): as a pizza or calzone topping, tossed with pasta, in a tart or quiche, in an omelette, tossed with farro or cous cous in a salad, as a dip for wedges of pita bread. This time I made a bruschetta/tartine of sorts with some fresh pain de champagne, but there are enough serving possibilities to keep me eating this for weeks to come. Perhaps worrying for future inspiration blocks, but we won’t worry about that just now. 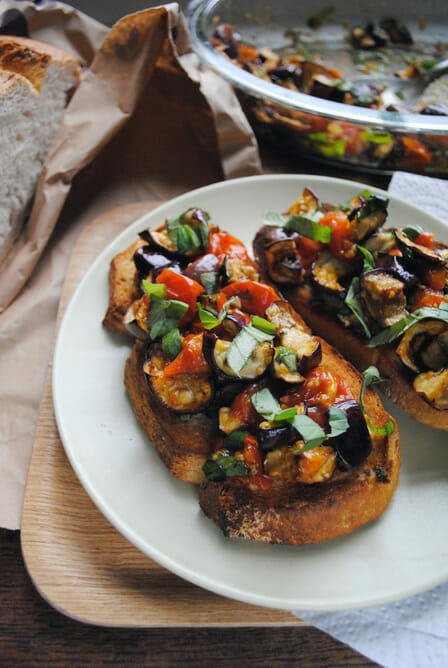 inspired by The Pioneer Woman

Prev
(Not Quite) Spring Veg A cooking blog – Kitchenist

(Not Quite) Spring Veg A cooking blog – Kitchenist

Recipe Hack: Warm Broccoli Salad with Onions, Chestnuts and Blue Cheese Its a 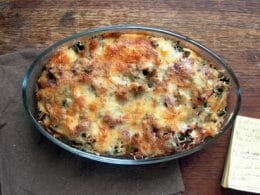 Last month, I did something extremely (some might say uncharacteristically) 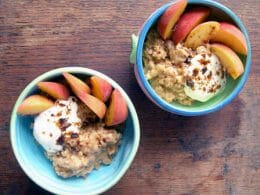 Before I head out to the farmer’s market, I wanted to share this quick breakfast

Tag: formula Formula for lunch: Legume salad As might be becoming clear by now,