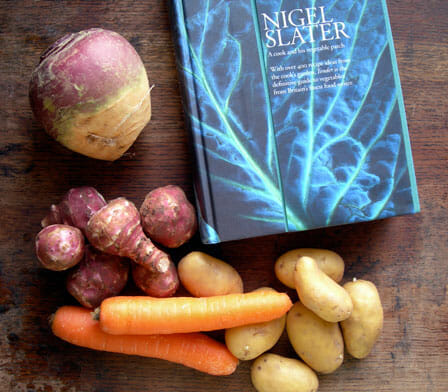 You know how, when you live with someone, you end up having very specific formulas for takeout? Perhaps it’s just human nature to fall into patterns; when I lived with my best friend in Toronto, we had our take out sushi routine down to a two-minute art. (One edamame, one California roll, one Spider roll, and one Bento Box A, please- oh, and we’ll send a boyfriend to come pick it up.)

Well, Andrew and I have a very specific formula that we follow when ordering Indian food- we get one vegetable balti (for me), one chicken korma (for him), and one prawn Madras or similar (to share). Add an order of rice and a naan to share, and we’re good to go. And I must confess: though I avoid the pieces of chicken, I almost always dip my naan into the korma to soak up some of that mild, creamy sauce. It’s not my favourite curry by any stretch, but an Indian takeout wouldn’t be the same without it. 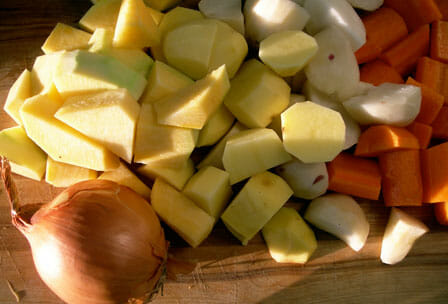 So I wasn’t surprised when my sister gave me Nigel Slater’s Tender, Volume I for my birthday in September, and the first photo that jumped out at me was of a root vegetable korma. I’d never even considered making my own korma before, preferring to stick to spicier and simpler curries for my home cooking. But it seemed like fate that I should make this, particularly as the farmer’s market is crawling with delicious root vegetables right now. 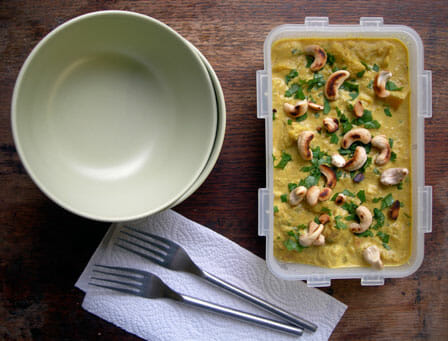 I opted to use a combination of carrots, potatoes, swede and Jerusalem artichokes, but parsnip, turnip, and even beets would also be good here. I quickly realised that the amount of veg stipulated by Nigel would feed a small army, let alone the four adults it claimed to. If there’s anything that I dislike about the man’s books, it’s the portion sizes- they’re always huge. Goodness knows how he stays so trim. I ended up nearly halving the vegetables, and just cutting down on the other ingredients (I like my curry saucy, so as to have an excuse for naan, rice, etc.).

The result was exactly what I was looking for- a homemade korma that tastes homemade. While many commercial kormas are almost cloyingly sweet, this one has a nice tang to it, courtesy of the natural yogurt in the sauce. And despite all the spices and chili, it isn’t too hot at all- perfect for those who like their curries on the mild side. Who knows- making this dish might become part of a new pattern around here.

Note: If you think the texture in this last photo looks slightly off, it’s the rice. I don’t have a microwave, so when I’m reheating 2-part meals like this (curry+rice), I tend to just mix it all together. Slightly less tasty, yet miles easier, then reheating the two separately. 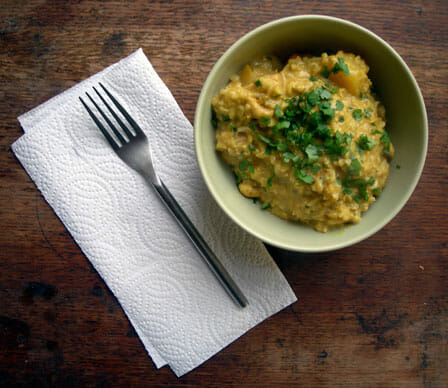 adapted from Tender, Volume I by Nigel Slater