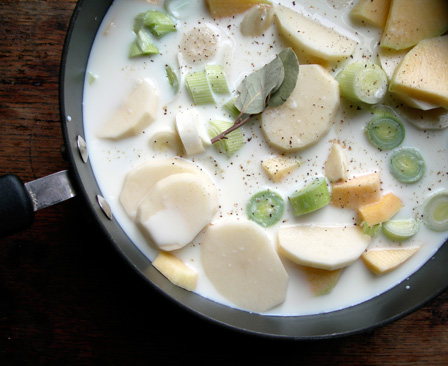 Lean in close, and I’ll let you in on a shameful little secret of mine: I’ve never successfully made a gratin before now. Absurd, right? The easy-peasy staple of French cooking, winter cooking and (let’s face it) 1950′s home cooking has never been my forté. Until now, that is.

It’s not as though I’ve been slaving away over a hot stove (er, oven) trying to make the perfect gratin or anything; I’ve only really tried once, and the dismal scalloped potatoes that resulted were enough to put me off the whole idea. Rather than the creamy, cheesy dish, I’d tried at my sister’s, my effort- with the same, borrowed recipe, I might add- was strangely both watery and lumpy. If I’m honest, my pride was a little hurt- I ‘m meant to be the cook in the family, after all.

Though for some reason, cooking au gratin was on my mind last week. Maybe it was the dawn of winter or the delicious-looking Swiss Chard and Sweet Potato Gratin that Deb posted, or (and this is more likely) maybe it was the two potatoes and half a swede left over from my Root Vegetable Korma, that was burning a hole in my crisper. 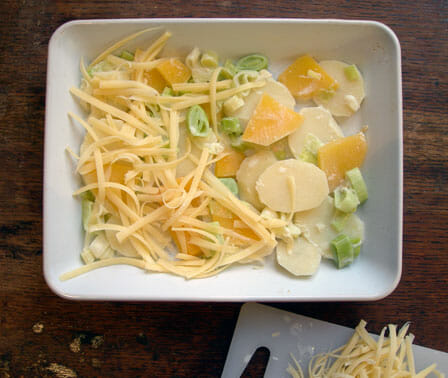 Somewhat imprudently for someone with acknowledged gratin performance issues, I didn’t follow any specific recipe for this dish. Instead, I glanced at a couple of my favourite go-to cookbooks for a quick refresher on technique and jumped in head first. I was unsure whether to precook the vegetables (some recipes call for it, some don’t) but decided to err on the safe side. For cheese, I chose a nutty Emmental, which I thought would be a nice change from my standby cheddar.

My “throw caution to the wind” approach worked, in this case. Hitting the nail on the head in both flavour and texture, the gratin was rich and creamy but delicately flavoured. Quite the coup- especially considering that I was only holding out for something edible. 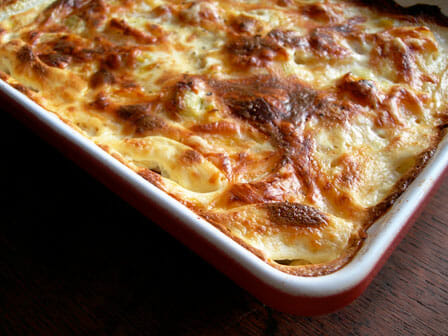