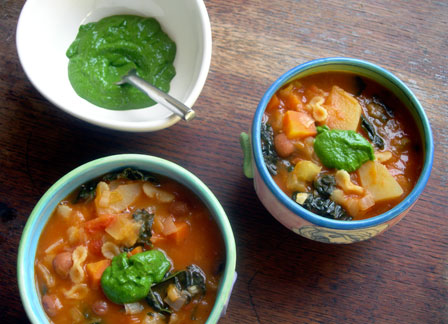 It has been quiet here at Kitchenist for the past week, and for that, I apologize. It’s really Decembers fault- instead of welcoming me with open arms, she decided to hit me where it hurts: right in my sinuses.

For the past couple days I’ve been battling with an achy head, sore throat, and runny nose, and it hasn’t been fun. Focusing all the energy I can muster on my Holiday Gift Guide at Kitchenisms has left little time for cooking, or eating. Thankfully for both you and me, I managed to pull myself out of my ginger, honey and lemon-induced stupor to make, a veggie-packed dinner the other day: pistou soup.

As I’ve mentioned before, I’m a big fan of soup when I’m feeling under the weather. So when I saw this recipe in my new Jamie Magazine Recipe Yearbook, and saw that it was full to bursting with veggies, beans, and pasta, I felt a little better already. The kicker on this otherwise lovely-but-simple vegetable soup is a dollop of fresh pistou sauce, a French cousin to pesto. Heres how my explanation to Andrew went:

What are you making?

Jamie claims that this soup feeds four, but I’m sure that’s a mistake. Possibly he meant that the recipe feeds four small families or four pro wrestlers, but seriously- this overflowed my Dutch oven, and I had to remove half of it to another pot. As such, I’ve played around with the quantities slightly, but still, expect this to make a meal. 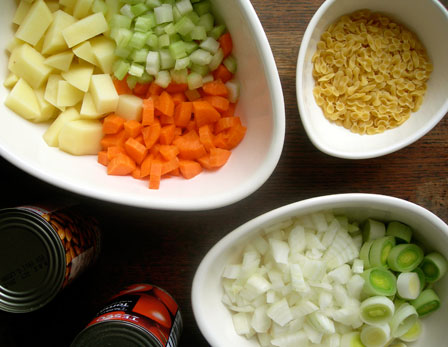