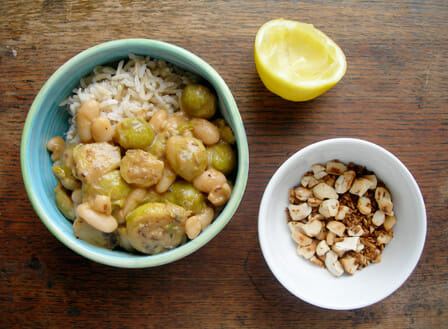 Are you a fiddler? Because I definitely am. No, I’m not coming clean about my ADD or professing some kind of musical gift, rather I’m talking about recipe fiddling. That insatiable urge to tamper, alter or tweak a new recipe into submission before you’ve even got a chance to know each other. I hear that there are people out there who don’t do this. Have read that some cooks like to make a dish as written, particularly on a first attempt. Are you one of these people? If so, please speak up, because I’m longing to know how on earth you do it.

The other day I mentioned that I was dying to try Orangette‘s Cream-Braised Brussels Sprouts, and it’s true. This recipe has been on my mental to-make list for months, if not years. However, it seems like Brussels sprouts and cream are opposing forces in my house; fate seems to ensure that I never have both in the fridge at the same time. But lo and behold, I recently found myself possessed of both sprouts and cream, as well as a desire to eat. So what did I do?

Why I fiddled of course. I decided that instead of listening to fate, instead of heeding Molly’s advice or the advice of the 60+ positive comments on her post, I was going to make this dish different. Better, even. Instead of cream, I’d use coconut milk! Instead of butter, olive oil, and toasted cumin seeds. While we’re at it, why not throw some cannellini beans in there, as well? (Regular readers know this is a favourite meal-maker of mine.)

And yes, it was delicious. And yes, more filling (with a side of brown rice) than the original would have been. But now I still haven’t made the Cream-Braised Brussels Sprouts, and I’ve got another recipe with which to distract me from them. See where fiddling gets you? 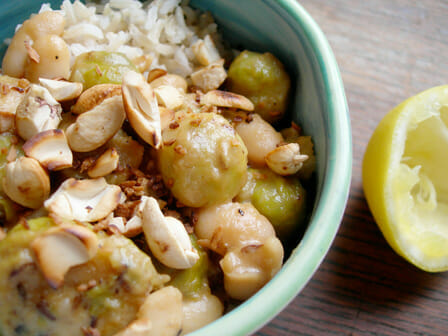 serves 2 as a main

New Year Veg Yesterday was the first farmers market of the new year, and I

More memories: (Not) Trenette al Pesto Ive been on somewhat of a pesto kick 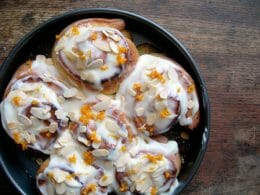 My friends, it’s been too long

In times of need: Ribollita

I was recently talking (er, emailing) with a friend back home about how November