Once again, I find myself in a familiar place: deep in cupboard clear-out mode. Andrew and I are jetting off to Canada on Friday (hmm- is Canada somewhere one jet too? I think not), and on to New York City several days after that (much more jettable, I’d say), and leaving behind a fridge full of food isn’t an option. When I have several different veggie odds and ends at my disposal, I like to find recipes which use them up together- bizarrely mixed salads or extremely creative stir-fries. Or in this case, Succotash.

Succotash is one of the (relatively) few classic American dishes. Based loosely on a Native Narragansett meal, its mainstays are corn and beans. Anyone looking for a definitive recipe for Succotash on Google is bound to be disappointed. Indeed, it seems that there hardly is one “correct” way to make this dish. Aside from the corn and beans (which by the way, can be any kind you like), it can contain cured meats and other starches, as well as just about any vegetable or herb you can think of. During the Great Depression, it was often served in casserole or stew form, while these days it’s more often relegated to the side-salad territory. Though slightly frustrating for the purists out there, this flexibility makes Succotash more than helpful when “cooking from the fridge”. 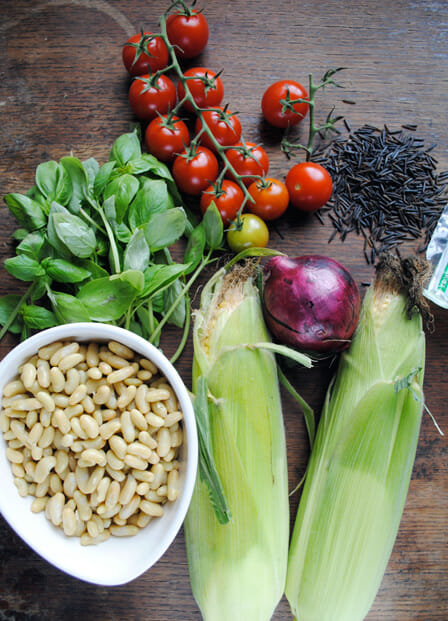 My own version ended up with an American-Italian flair of sorts. Because of the dish’s Native roots, I figured that some Canadian wild rice would be a natural companion for all that corn and beans. As well as bulking out the dish, the rice lends a toothsome texture in the absence of any meat. Since I had them in the fridge, I threw in some cherry tomatoes and a whole bunch of basil, too. Flavoured with a bit of smoked paprika, this dish was definitely more than the sum of its parts.

Despite having only eaten Succotash on one or two occasions before now, this dish made me rather nostalgic. I guess an authentic(ish) North American meal is the perfect thing to snack on while preparing for a North American holiday. Now- if only it could help me fit all my shoes into my suitcase. That might be asking a bit much. 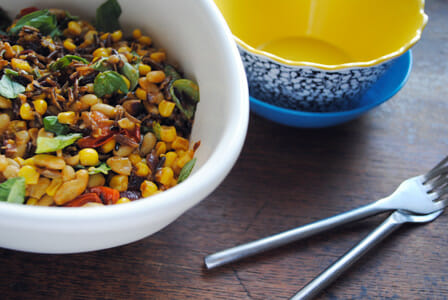 Succotash with Wild Rice and Tomatoes