Some flavours just seem to go together, to the point where they’ve become almost married in our minds, and it seems odd to have one without the other. Beetroot and goats cheese, butternut squash and sage, basil and tomato, salt and pepper. Ok, that last example might be taking things a bit too far, but you get the picture- sometimes, ingredients just seem made for one another.

But what about those combinations that surprise us? Some pairings (cheddar and apple, chocolate and chili) seem odd at first, but work just as well, and quickly become as matched in our minds as any of those previously mentioned. I think celeriac and apple is one of these combinations- the mild earthiness of celeriac is a perfect counterpoint to the sweet-and-sour flavour that is apple.

It seems not everyone agrees; a few weeks ago, a Celeriac and Apple soup was special at work and didn’t attract as much love as I thought it deserved. More than one potential customer walked in, read the specials board, and walked out again. I thought it might have been the apple; perhaps people weren’t jazzed by the idea of the fruit in their lunchtime soup? A co-workers wager was that the celeriac was the culprit; it just isn’t a ”popular” vegetable.

Whatever the reason, I didn’t mind. When my lunch break rolled around, the soup’s lack of popularity simply meant that there was some left for me! You might be a skeptic too, but I’m betting you won’t be for long once you try this winning combination. 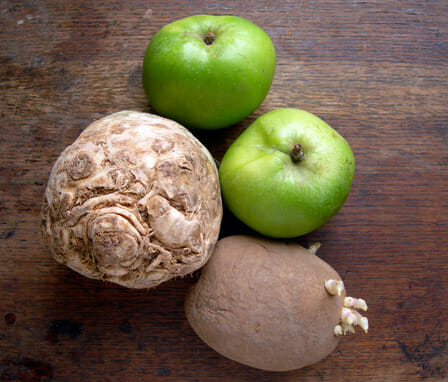