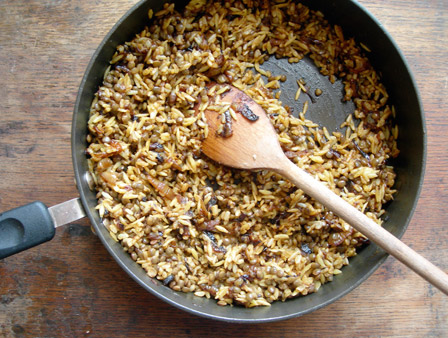 This is the post that nearly wasn’t. My quest to make this dish sent me on a wild goose chase across London, causing unforetold amounts of stress and frustration, and almost resulting in no dish at all.

See, I was intending to come up with a clever mash-up of two favourite meals: mejadarah, the addictive Arab dish of rice, lentils and onions, and koshary, its close Egyptian cousin, which adds pasta to the mix. I’m an especially big fan of the latter, but sometimes feel like the pasta overwhelms the other textures. My clever solution? Israeli couscous. Essentially super-small, spherical bits of pasta, I figured the couscous was the perfect way to keep the taste and texture of this dish just so.

Only, I couldn’t find any Israeli couscous. Anywhere. I tried supermarkets. I tried heath food shops. I tried specialty food shops and even the expensive department store food halls in the West End. I grew so frustrated I even considered asking my Mum to mail me the box of Israeli couscous that I knew was sitting in our pantry back home. Though I’m no stranger to becoming obsessed with hunting down an obscure ingredient, this was the first battle that made me feel like raising my white flag and giving up.

And you know what? I did. After coming home, exhausted, from what will now be called The Great Israeli Couscous Hunt of 2010, I found a box of tiny, rice-shaped puntalette pasta in my corner shop. Good enough.

Purists, I must warn you: this dish is neither mejadarah, nor koshary, nor a reasonable simulation of either. I made countless changes, mainly to suit my laziness and impatience as a cook. Both of the original dishes cook the rice with the spices, then sear each carb in a separate pan, which results in confusion and many dirty dishes. I made mine a one-pan meal, compromising neither flavour nor feel. I also substituted puy lentils for the called-for brown, because I think their firmer texture works here.

So authentic my Mejadarish might not be, but it is delicious. Delicious enough that, on tucking into a bowl of this carb-fest for lunch the other day, I resolved to make it again as soon as humanely possible. I still think it would be great with Israeli couscous, so Mum- do you mind popping that box into the mail? 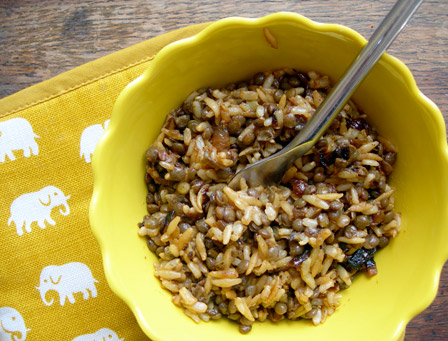 Note: The best way to eat this as leftovers? Add a can or two of chopped tomatoes and simmer until hot through. Serve with crumbled feta on top. The sweetness of the tomatoes and saltiness of the feta make this version almost better than the first.