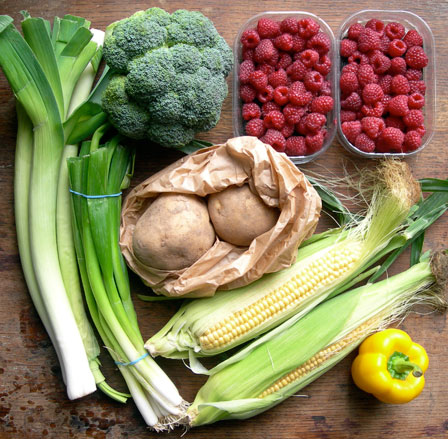 Well, its official. There have been whisperings about it for weeks now, but I can now confirm: Autumn has arrived! Despite the still-sunny days and mainly-green trees, theres a crispness in the London air which marks the start of my favourite season. I especially noticed the change at the market today, which was full of shoppers looking for the first of Autumns bounty.

I dont often buy corn, but was thrilled to see it at the market today- it means Autumn has truly arrived. We could be eating this as-is, off the cob and with butter, but I might try doing something more interesting with it. I love cornbread, so maybe a traditional, corn kernel-flecked one is in order? Heidis Firecracker version looks great.

The leeks and potatoes are already gone, simmering together on the stove as I type this. Sunday is fast becoming Soup Day around here, and I thought a Leek and Potato soup was a perfect way to ring in the new season. Ill be posting my recipe later today or tomorrow at the latest, so check back for it.

Those raspberries were bought for a very specific purpose: hand pies! I made some delicious Bourbon Peach ones from Smitten Kitchen yesterday, and ever since Ive been itching to try my hand at some other flavours. I thought perhaps some Raspberry Cream Cheese pies wouldnt go amiss?

What Fall treats are you making this week?