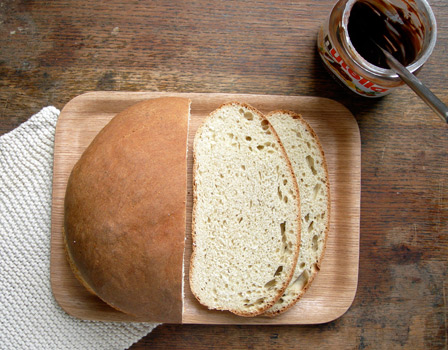 Of all the misnomers in this world, the one that infuriates me the most is banana bread. I love the stuff (could eat my sister’s all day long), but let’s face it- this is a very poorly monikered treat. Nine times out of ten, the “bread” in question is actually a cake; there’s oil or butter, vanilla extract, eggs- not to mention the requisite cup or so of sugar. For heaven’s sake, there are sometimes chocolate chips involved.

But this, my friends, is not that kind of banana bread. Continuing with my theme of the year, I was looking around for something a little different for this week’s loaf. My eyes settled on two unused and overripe bananas, turning soft and brown (as they tend to do) on my countertop. Problem solved- I was going to make banana bread. A real banana bread.

For help, I turned to Google, but my searches were futile; “banana bread that’s really bread” and “banana bread with YEAST” yielded nothing more than cake, cake and more cake- some not even bothering to masquerade as bread. Eventually, I came across an interesting fact: bananas have roughly the same water and starch content as cooked potatoes. Reaching for my trusty copy of How to Be a Domestic Goddess, I flipped to an old favourite of mine- Nigella‘s basic Potato Bread. Surely this recipe could be tweaked and reworked into the banana bread of my dreams?

Though slightly softer than the one it’s based on, this loaf still has a chewy, tight crumb and the ability to make fantastic toast. Granted, it might not pair so well with cheese, Marmite or Rarebit– but it sure was tasty with peanut butter and Nutella.

Yes, Nutella. I know, I know- I may have just as well made a cake. 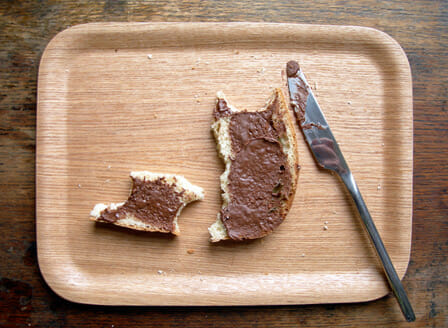