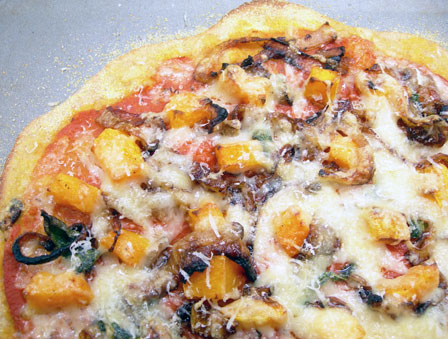 Around here, Friday night is Pizza Night. I don’t remember exactly when this tradition started, but sometime last year, I became obsessed with the idea of learning to make the best pizza. Not just a passable pizza, not a good pizza, but the best pizza. It was probably this post from The Kitchn that put the idea into my head in the first place, and it grew from there. Of course, anyone knows that there are two components to a great pizza: the dough, and the sauce. This instalment of Pizza Friday will follow my quest for crust gold. 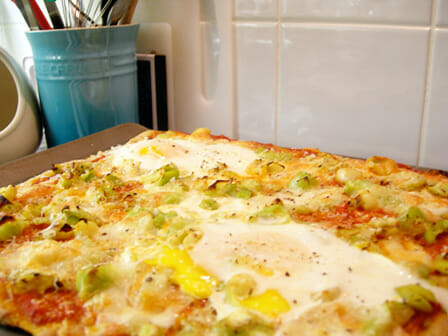 I started my search for the perfect pizza dough recipe with the basic recipe posted on The Kitchn, but soon found it too boring. I wanted a pizza crust with more flavour, something that contributed to the finished product, instead of just holding up the toppings. Thinking I wanted a more developed bread flavour, I tried Heidi‘s recipe for Napoletana Pizza Dough, which many bloggers seem to love. I was unimpressed, even after trying the recipe for a second and third time. Maybe it was my flour or the humidity in the air, but I found the dough difficult to work with, and almost too elastic in feeling. And, call me crazy, but I don’t think pizza should require a PhD to make well. Come on- food thermometers, multiple rises, special pizza-shaping motions, it’s all a bit pretentious for my Friday Night Pizza. 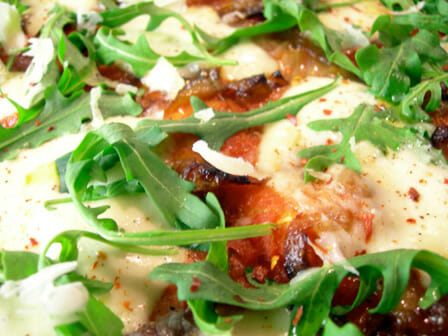 Eventually, I turned to Mark Bittman’s recipe for Basic Pizza Dough from How To Cook Everything Vegetarian. It hit the nail on the head in several ways- easy to make (there is hardly any kneading involved), easy to handle, versatile and delicious. I began to play around with the variations Mark typically includes with his recipes and eventually hit on a combination that satisfies my pizza dream. I use one third whole wheat flour, not only because I prefer the taste, but because I find it difficult to make anything (save certain desserts) with all white flour. I also add a touch of brown sugar for sweetness and cornmeal for that pleasant crunchiness.

So, do I make the best pizza now? Well, probably not. I am woefully stone-and-peel-less, and I’m sure it’s all kinds of wrong to claim that the best pizza is baked on a cookie sheet. My dough, however, I’m happy with. The perfect mix of softness and crunch, sweet and salty, it never fails to make a great pizza, and I haven’t got bored of it yet. Next week: Sauce.