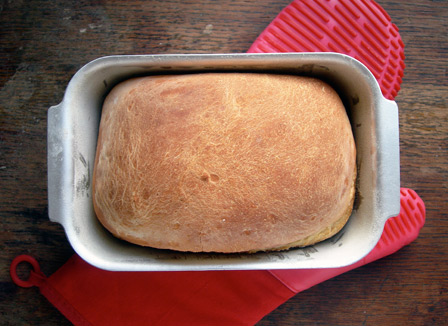 Back at the beginning of January, I wrote about my foodie resolution for 2010, to bake more bread. A resolution made with the best of intentions, borne of visions of wholesome, proud loaves emerging from my kitchen one after another. Not to mention the great arms I was going to have (you know, from all the kneading).

However life got in the way, as it tends to, and for several weeks it was farmer’s market leaves and (gulp) grocery store sliced bread for me. After returning to the UK last week, I decided to give bread-baking another go, and I had just the recipe for it. Found in a cookbook (I don’t remember the name) my Mum had from the library, I hastily copied down the ingredients for this Milk & Honey bread in my journal during my last day at home. Something about the description intrigued me: a basic sandwich loaf with a soft texture, shiny crust, and slightly sweet flavour. 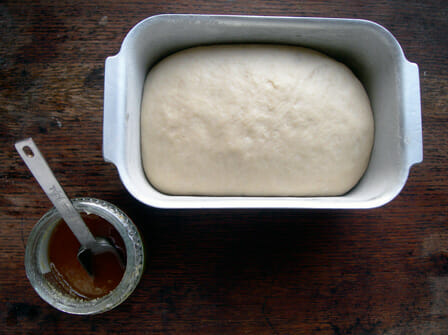 Unfortunately, the first version of this bread was nothing to write home about. Whether I interpreted my scribbles wrongly or whether the recipe was a dud in the first place I can’t be sure, but the resulting loaf was small and heavy, without the mild but vibrant flavour I’d been promised.

I’m not normally one to try a disappointing recipe twice (I just don’t have the patience for endless experimenting), but for some reason, I pressed on with this one. I’m glad I did because, after a bit of tweaking, version 2.0 was everything I’d been looking for. Chewy and sweet but not aggressively so, this bread makes wonderful toast, especially with savoury toppings (I’ve been enjoying this for breakfast, spread with butter and Marmite). Whether or not your own New Year’s resolutions are still going strong (anyone?), I highly recommend giving this one a go. 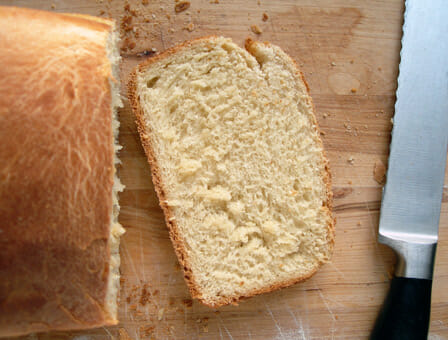