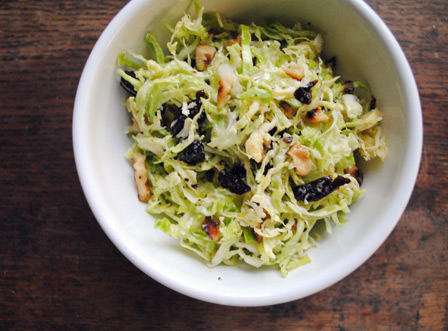 If you follow me on Twitter, you might have seen this a few hours ago. And if you did, you’d be forgiven for thinking that I’d finally lost the plot. It’s rare that I make something that day and immediately want to blog about it, but this is fresh off the presses: people, sprout slaw is awesome.

I’ve been thinking about this sprout slaw recipe ever since Deb mentioned it this time last year. Though her words weren’t exactly complimentary (“tastes like eating a bowl of grass”), I was intrigued. But, like many other things, it got filed away in the furthermost recesses of my mind, and I promptly forgot about it. Fast forward to a year later. After finally getting to grips with slaws in general, I’m a little more adventurous than I was last year. Also, I have a massive stalk of sprouts in the fridge, which I have to use by the end of the week. Now is the time for guts and guile. 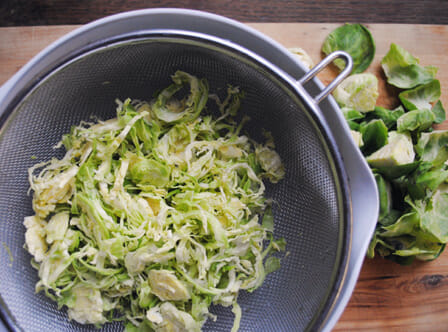 So I sliced, shredded, dressed and seasoned; my only addition to the original recipe was some chopped dried cranberries (to make it more festive) and a generous amount of freshly ground black pepper (to make it, or, peppery). Pretty soon I was tucking into a bowl of slaw so flavourful, crunchy and addictive that I had barely swallowed my last bite before I got up for more (no need to feel guilty when it’s just raw veg, right?) If this is what eating a bowl of grass is like, sign me up for summer.

Actually, do that anyway. 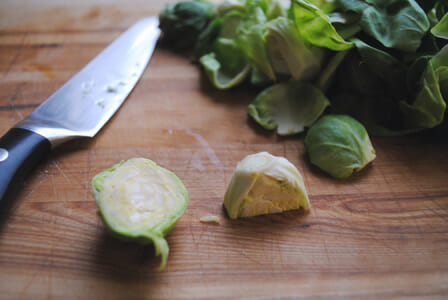 serves 4, more as a side

Note: To shave the sprouts, tear away the outer leaves first. You can use a mandoline or sharp knife to make thin shavings but only slice about half-way down each sprout. At this point, switch to shaving from the sides of the sprout. Basically, you’re trying to avoid the white/yellow stem of each sprout, which is too hard for this salad.