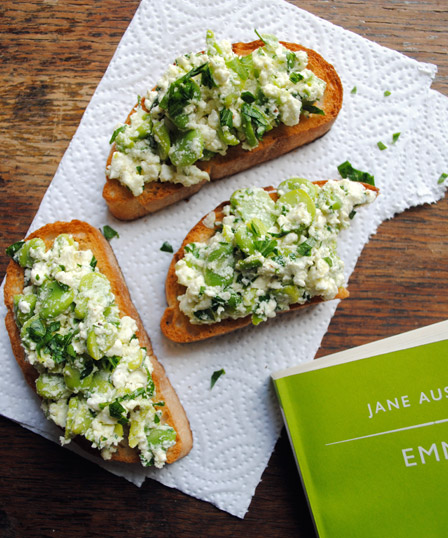 No, that book isn’t just there because the colour matches so beautifully; I really was reading Jane Austen in the kitchen. Emma is a favourite of mine, though for some reason it can take me weeks to get through it. I’m not sure why – I can pick up Pride and Prejudice after breakfast and practically be done by dinner – but Emma is a demanding read for me. So when I feel like tackling it, I’ll leave it somewhere I find myself often.

But today’s post isn’t about literature in odd places, it’s about bruschetta. One of the world’s most popular appetisers, it wasn’t until recently that it became popular with this Kitchenist. Why the delay? Blame it on the tomatoes. Like cooked fruit, summer squash, and most tropical fruit, raw tomatoes are one of those things that I just can’t do. Looking at that list, I think it’s probably “the squish factor” that I take issue with. I’ll take tomatoes cooked, dried, in sauces and soups, but never raw.

Of course, bruschetta doesn’t require tomatoes, as the word refers to a dish and not a set of ingredients. As fellow food blogger as Tiina so beautifully shows, it’s actually hugely versatile. Once I cottoned on to the fact that bruschetta is just stuff on bread (hmm, and salads are just any dish not served hot– maybe I should put these pearls of wisdom in my own book), I did an abrupt 180° on it.

This version is a taste of summer, with fresh, raw broad beans crushed with feta and parsley. I made a similar recipe last June; my pesto combines broad beans with peas, garlic, lemon zest, herbs and parmesan cheese. Delicious, but I was in the mood for something simpler today, and this rustic take pares down the flavours to their simplest state.

If you think about it, bruschetta is the perfect summer meal: quick to prepare, light, flavourful and infinitely adaptable. I’ve probably got enough topping ideas to keep me eating it all summer long. Which is a good thing, since I’ve really got to finish that book. 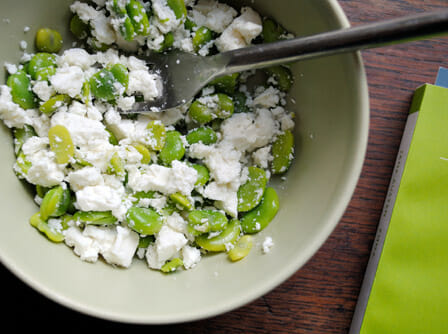