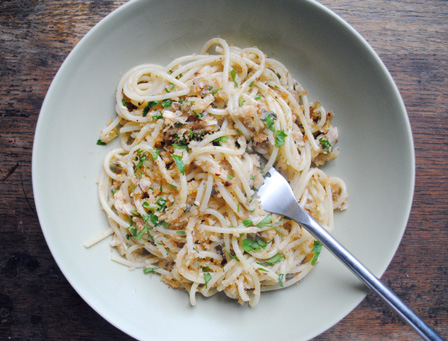 If you scanned the recipe page of this blog, you might be led to believe that I was vegetarian. But I’m not, at least not technically. Though I’ve been meat-free for almost three years now I do occasionally eat seafood, so the term “pescetarian” more accurately describes my eating practices. Generally though, I prefer to use the term vegetarian for a couple reasons- first of all, many people have no idea what a Pescetarian is, and secondly, it’s terribly pretentious-sounding, don’t you think?

Then, of course, there are the Judges. I’m often embarrassed to even admit that I eat seafood, lest I’m faced with the dreaded “Why? Don’t you think fish have feelings?” or “I guess fish don’t count as animals to you because they’re not cute”. Here we go. I don’t get caught up in these conversations because my reasons for eating seafood are hardly better than a lack of cuteness: I like it and think I’d miss it too much if I gave it up. For me, giving up meat was easy, but I’m not sure giving up fish would be. 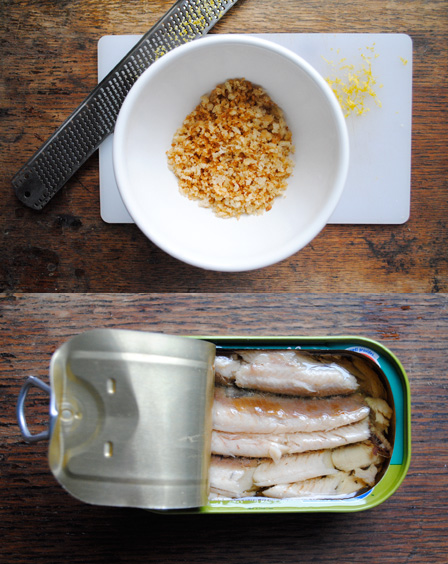 That said, I don’t eat seafood very often, and fresh seafood even less so. Maybe the hardest fish for me to give up (and I’m not gonna try) would be anchovies; these salty little fillets add a savoury kick to sauces and pasta dishes that I just adore. It’s surprising, then, that until recently I’d never tried their close cousin, sardines. Long-known to be a “brain food” and rich in omega-3 fatty acids, canned sardines are also, as I’ve recently discovered, wicked good.

This recipe, which comes from an old Mark Bittman column, is one of those great “pantry standbys”. You probably have many of the things needed to make it – pasta, sardines, capers, breadcrumbs – in your cupboards right now, and the others – lemon, parsley – in your fridge. The genius of it, aside from the possible effects of the sardines (ha, ha), is in the breadcrumbs; they coat the pasta and somehow corral all the other ingredients into a sauce. Moreover, it’s quick to make, filling, and defies the need to shop much.

And of course, it’s tasty. And isn’t that the best reason for eating something? 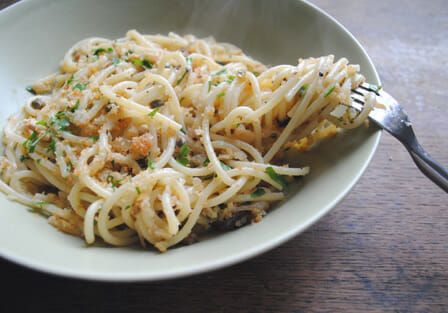