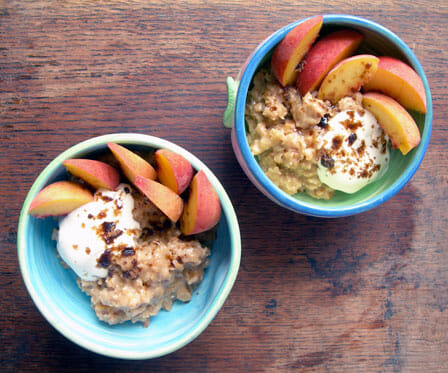 Before I head out to the farmer’s market, I wanted to share this quick breakfast with you. I made this the other day when there was almost nothing in the house in the way of food. Seriously- it was one of those days when you wake up inexplicably starving, yet there’s nary an egg, piece of bread or cup of cereal to be found.

Scanning the counter in desperation, my eyes landed on a canister of rolled oats, leftover from my last bout of granola-making. Perfect! It’s getting cool enough to make porridge again, and I figured this hearty breakfast was just what we needed. Andrew looked slightly nonplussed at the idea of porridge, but it didn’t phase me; I knew I could do better than whatever he had in mind.

Grabbing a lonely peach from the fruit bowl, some dried apricots from my baking shelf and some cinnamon from the spice drawer, I got to work. Served with a dollop of crème fraîche, this elevates the humble breakfast porridge to new heights. In fact, when I put these bowls down in front of Andrew 15 minutes later, he responded with “What the hell is this!?” He meant it in the nicest possible way, I assure you. 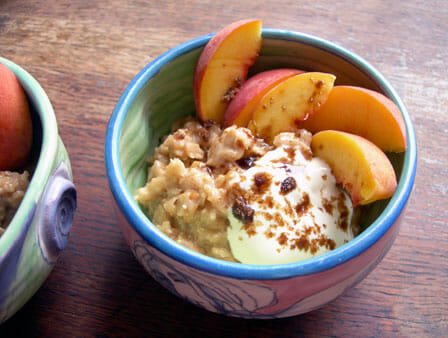