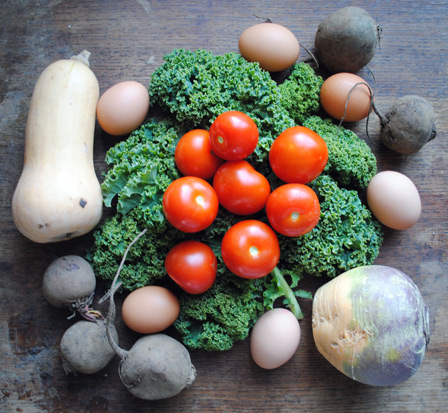 Hello, new year! And hello friends- how have you all been? My winter holidays went a little longer than planned, due to a post-New Years trip home to Canada. After some snow-induced changes to my Christmas, I was craving a little family time, so took the past week off in favour of homemade meals, nights out with friends and family parties.

I’ve been back for two days so far, and am suffering terribly from jet lag. Yesterday I didn’t wake until noon and didn’t do too much better today. As such, it was pretty late by the time I made it to the market, and many of the best stalls were already closing. I did manage to get some produce in my bag though, to fuel the busy week I have planned.

The kale will probably go in a soup, as its the season for them. This New Years Noodle Soup is calling my name, and the addition of kale will give it the heartiness I crave, while still being healthy. The tomatoes will likely get used for some pasta sauce or another; I received The Geometry of Pasta

for Christmas, and it has some delicious (and very stylish-looking) recipes. The rutabaga, or swede, will go into a luxurious, mouthwatering gratin. Sounds preposterous I know, but my Mum made it a couple nights ago and believe me, it’s delicious. As soon as she sends me the recipe, I’ll be cooking it myself and posting the results.

As it is January, I’m trying to stay away from the sweets and baking. However, I don’t think that Andrew should be made to suffer for my resolutions, so I might make a cookie or bar later in the week, and throw it up on the blog too.

How is 2011 treating you so far? What are you cooking in this new year?