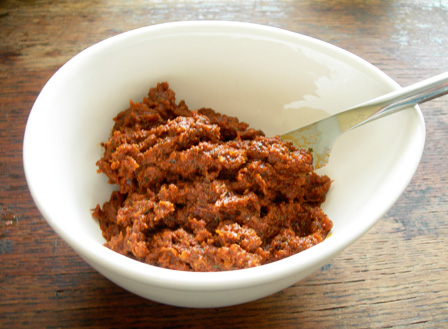 I told you on Sunday that sandwiches have been the weekend lunch of choice around here. There is something wonderfully comforting and somewhat modest about tucking into two slices of bread with stuff between them. Andrew has it pretty easy – a couple of slices of honey roast ham, some turkey, a spreading of gourmet coleslaw and he’s happy. However, as someone who won’t eat meat or coleslaw (mayonnaise- ick), I have to be a little creative to keep my sandwiches exciting. My favourite way to do this is with spreads- a flavorful tapenade or pesto needs nothing alongside it other than some good cheese and fresh lettuce.

This Sundried Tomato is probably my best spread of all. Versatile and tasty, it’s a real crowd-pleaser. There are a lot of recipes for this kind of thing around, and to be honest, I’ve never tasted one I didn’t like. This version is inspired by my Mum, who told me over the phone sometime last summer about a similar version that her and my Dad had been enjoying. I’m not sure where she got her recipe, but it was slightly simpler than mine- just tomatoes, lemon juice, olive oil, salt and pepper. The combination really is amazing- the lemon juice just cuts the sweetness of the tomatoes. I, of course, have played around a little, adding garlic for a sharper flavour (she’d hate that) and parsley for added body.

This spread is a real workhorse. Not limited to sandwiches, it’s also great with crackers, cheese, as an addition to soups and sauces, even with eggs. I also make a quick pasta that involves nothing more than tossing a couple of spoonfuls of this with pasta and freshly cooked prawns and topping with parmesan. The spread also freezes very well. 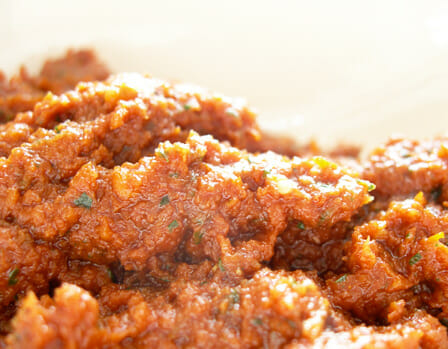 Variations: This spread has infinite possibilities. Replace the parsley with basil for a more Italian flavour, and change the proportion of sunblush to sun-dried tomatoes as you like. (The more dried your tomatoes, the more olive oil you’ll need to add.)