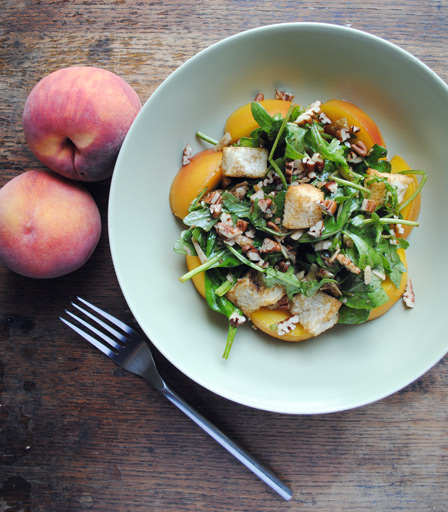 One of the things I love about travelling is noticing all the local trends in the places I visit. The world can feel so small and homogenous these days, that I take delight in noticing these regional differences. At the wedding I attended in Canada earlier this month, my sharp-shouldered blazer caused much mirth among my friends; apparently, the linebacker look has yet to reach my hometown. The next week in New York City, I noticed that all the sharply-dressed guys were wearing boat shoes and the girls, over-the-knee boots-  both looks which have yet to really take off in London.

It’s the same with food, apparently. This likely won’t be news to most of you (given that Google Analytics informs me that most of my readers are in North America), but peach salads are trending huge over there. I tried two in my mere week away, one in Canada and one in NYC, and noticed several more kicking around on menus. Unlike the over-the-knee boots (which at 5’2″, I’m far too short to pull off), this is a trend I can get behind. I’m a big peach fan, especially of the Ontario freestone variety. I’m more used to enjoying the fruit in pies or on its own, but between all the wedding cake and Shake Shack I can eat, I like a little salad now and then. 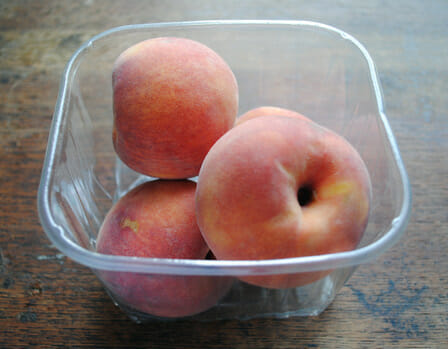 It seems that a successful peach salad follows a strict formula: some sharp-tasting greens like rocket or endive, balsamic dressing, some crunch in the form of nuts or seeds, and of course, peaches. The first one I tried, in the fantastic new town restaurant in Ottawa, threw beets in the mix, which added a nice earthy flavour. The second, at the preposterously friendly, charming and delicious Joseph Leonard in NYC’s West Village, used toasted bread chunks and grated cheddar.

It was the latter which I was trying to emulate here (no offence Ottawa, but it’s hard to beat NYC in a taste-off). Rocket and spinach, chewy croutons, chopped pecans and ripe peaches, tossed in a balsamic-cheddar dressing. The choice of cheese may seem odd, but trust me on this: incorporated right into the dressing, it lends a sharp, savoury bite to everything it touches.

This is one trend that deserves to go worldwide. So give this salad a try, and maybe together we can make it a classic. 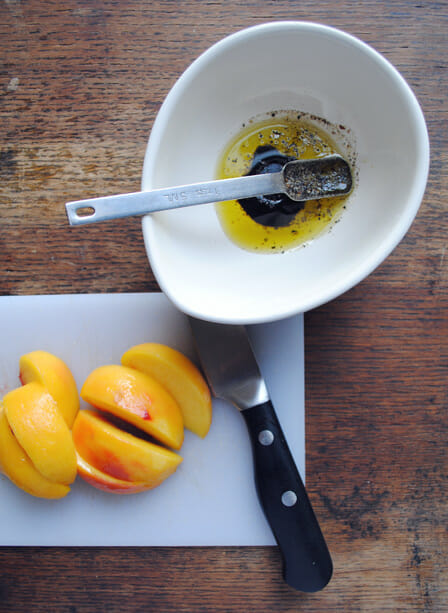 Peach Salad with Pecans and Cheddar