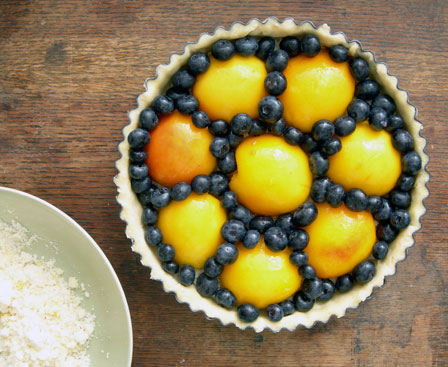 I’ve already mentioned my dislike for cooked-fruit desserts here on Kitchenist. It’s the texture: fruit should be crunchy (apples), or crisp (grapes), or at the most pleasantly yielding (bananas), but never a soft, mushy mess. Try as I might, I’ve never been able to get over this hang-up. As a consequence, pies have been off the menu for most of my life. Sure, I’ll take a lemon meringue one or a yummy chocolate version, but an old-fashioned apple pie? Forget it.

However, there is one fruit pie that I’ll eat, and happily. My mum’s peach pie is not only baked, but it’s absolutely delicious. I’m not sure what makes this pie so different (I’m amazed she got me to try it in the first place), but I have a hunch. It’s made with fruit halves instead of slices, and while fruit slices can quickly disintegrate into mush territory, whole peach halves have a bit more structural integrity. 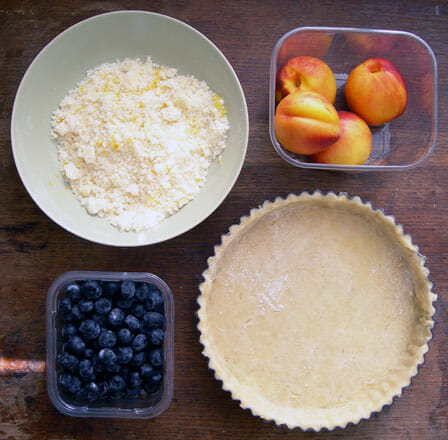 More importantly, though, did I mention that it’s a peach pie? That alone was probably enough to convince me. To my tastebuds, nothing says August like a juicy, ripe Ontario peach. Growing up we ate them all the time, so imagine how upset I was when I moved to London and discovered that you can’t get peaches here. Well, of course, you can– but they’re imported, and just not as tasty as my beloved Ontario ones. Watery peaches with an aftertaste of environmental guilt do not a happy Ele make. Believe it or not, but I haven’t had a peach in almost three years. 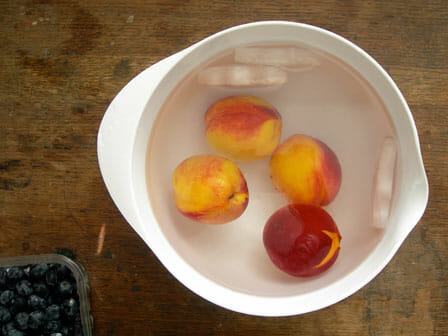 Given that a) for nearly three years I’d behaved like a paradigm of virtue, b) I was craving peaches like there was no tomorrow, and c) I really wanted to share this recipe on the blog, I decided, just this one, to cave in a buy some peaches. Only, I couldn’t. No, not the guilt again- the peaches! Apparently, I’m the only one with such misgivings about imported fruit, because my grocery store was completely barren of the fruit when I went to buy it. As in there was a single sad, bruised fruit at the bottom of an otherwise empty bin. Determined to have my pie, I bought some nectarines instead. I mean they’re just fuzzless peaches, after all. 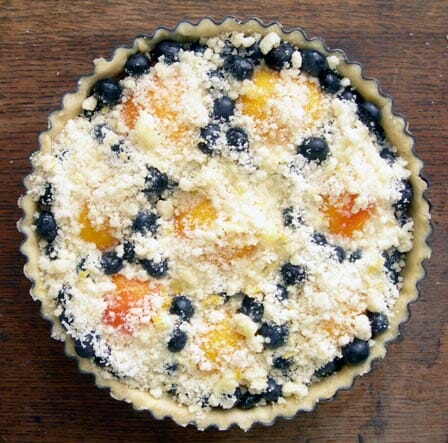 To get my hands on Mum’s recipe, I asked my sister. She’s usually more on the ball with these things than I am, and I figured she’d have it already. Turns out my favourite peach pie is from the famous Canadian Mennonite cookbook Food that Really Schmecks. I should have known; this classic is full of delicious, old-fashioned recipes.

Hil didn’t send a pastry recipe, but I quickly found one to adapt for my needs. I changed the filling only slightly, throwing in some blueberries from the farmer’s market. My mum often made this variation, and I almost like it more than the original. Yes, the blueberries do go soft, but I don’t mind in their case- perhaps because they bypass the mush stage and become almost a jam, holding the peaches together.

Whatever the reason, this pie is worth making. Whether you’re like me and hate cooked fruit, or are (likely the case) more normal, just make it. I wouldn’t be surprised if it became your favourite pie, too. 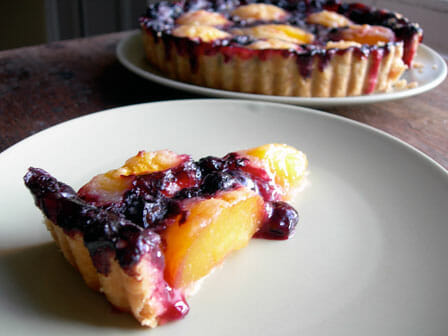 adapted from Food that Really Schmecks by Edna Staebler

makes enough for one 10″ pie crust (bottom only)