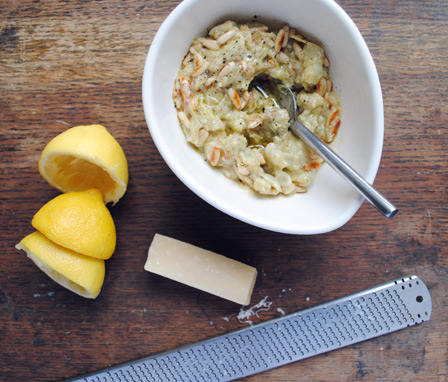 I love artichokes. I am an artichoke girl. To me, artichokes taste like summer: sitting on my parents’ back deck in denim cutoffs, listening to the sounds of the neighbourhood (laughing children, birds, the occasional barking dog) and feeling lemony butter dribble down my chin. Which just goes to prove that it’s not always your first memory of something that sticks because my first taste of artichokes was the world away from that picture.

The year was 1992. The setting, England in November (which, for those who haven’t experienced it, is pretty far removed from a sweltering Ontario summer). Yup, I discovered artichokes on my first-ever trip to the land I now call home, though if I’m honest, I can hardly remember it. Apparently, the family friends we were staying with made them for us, and my sister and I were both immediately smitten. Part of me is highly sceptical of this story, given that I can still recall a strange purple soup cooked by the same party during that holiday, but my Mum insists it is so. In any case, this gave my Mum leaves to start buying artichokes back at home, leading to the rather more clear and pleasant memories I’ve already shared.

Even though I love eating artichokes, I’ve never had much luck cooking them. My steamed ones never turn out as tender as my Mum’s, my lemon butter never as delicious. I find trimming them and removing the precious hearts cumbersome and perplexing. Given this tendency for failure, as well as their astronomical price, I don’t buy them often. 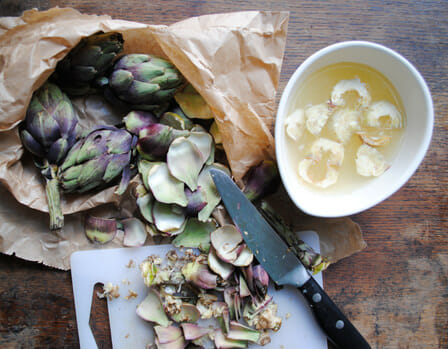 But the other week, while admiring a vegetable stall at the farmer’s market, I overheard a conversation that convinced me to try again with my beloved artichokes. A vendor was discussing cooking techniques with another customer and mentioned an artichoke pesto, made with lemons and parmesan. Immediately, I had visions of a creamy, brightly-flavoured sauce to toss with pasta or dollop on pizza dough, and I knew I wouldn’t rest until I’d made it.

It took me several weeks to find a recipe that suited my purpose. In hindsight, I suppose it would have been easier to just ask the vendor at the time, but I’m not like that. Painfully socially awkward with those I don’t yet know, I’m also something of a masochist- so a prolonged and frustrating recipe hunt it would be! In the end, it was Mark to the rescue; his recipe for Braised Artichoke Hearts turned out to be the perfect fit, and soon I was luxuriating with a bowl of artichoke-and-lemon-kissed pasta, thinking about how eavesdropping can (occasionally) be a good thing. 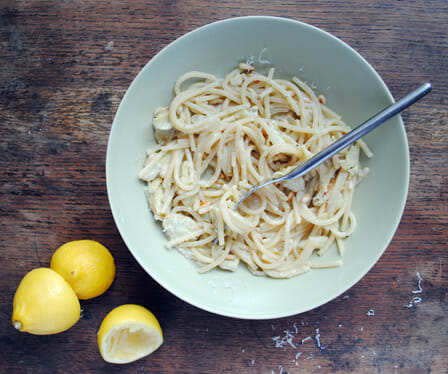 adapted from How to Cook Everything Vegetarian by Mark Bittman

makes about 1 cup (serves 2 with pasta)